As the year has progressed the global growth outlook has become increasingly mixed.  Amongst the developed economies growth in America is looking increasingly solid while Japan and the Euro zone continue to struggle. That is leading to an increasing divergence in monetary policy as the US Federal Reserve ends its quantitative easing program and looks likely to raise interest rates next year while the Bank of Japan and the European Central Bank are stepping up their asset purchases.  (For more on central bank asset purchases click here for a recent Investment Insights from our Head of Investment Strategy Keith Poore).

With the recent cut in China interest rates and the increasing likelihood of the same in India monetary policy in the key emerging economies is also on a divergent path as Brazil and Russia continue to hike rates in the face of persistent inflation pressures and, in the case of Russia, concerns about financial stability. 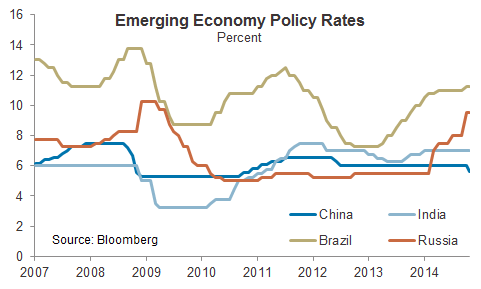 The surprise (at least for me) cut in China interest rates is a clear signal that policy makers are concerned the more targeted easing measures to date will be insufficient to achieve the desired growth/inflation outcome.  Indeed the move to cut rates is likely to be on the back of recent low inflation which has led to an increase in real interest rates and the fact that recent measures to lower mortgage interest rates have been ineffective.  Recent appreciation in the exchange rate, especially against the Yen, was probably also a factor.

It remains to be seen what impact this will have on the real economy.  While the rate cut is probably more likely to have an impact on borrowing costs for larger corporates than SMEs (who are more reliant on the shadow banking sector for funding) it is a clear signal that policy makers want to get the cost of capital down.  Having now started, further rate cuts appear more than likely.

Concern that policy-makers are abandoning the reform process in favour of cyclical support for the economy is ameliorated by the move to widen the deposit ceiling from 10% to 20% which, while subtle, is a further step towards interest rate liberalization.

While the recent weakness in the property market is a clear concern, I’ve been pretty comfortable with the broader slowdown in China growth.   I’ll stay comfortable so long as lower growth is a reflection of continuing implementation of the reform program that, while leading to lower growth over time, will make that growth more sustainable.

Interest rate cuts won’t preclude continuing efforts to increase fiscal spending and attempts to get local government to increase infrastructure spending.   These measures were successful in supporting growth earlier this year and will likely do so again, at least once we get past the likely further weakness in industrial production in November reflecting measures to reduce pollution ahead of the November APEC meeting.

Meanwhile the growth/inflation outlook in India is moving increasingly in favour of interest rate cuts. Inflation has moved sharply lower over recent months Inflation fell in India during October primarily reflecting a drop in food price inflation.  The lower inflation outturns will ease the pressure on the Reserve Bank of India, which recently introduced an inflation targeting regime.  That said, interest rate cuts are probably more a 2015 story and require the new Government to maintain a strong fiscal discipline. 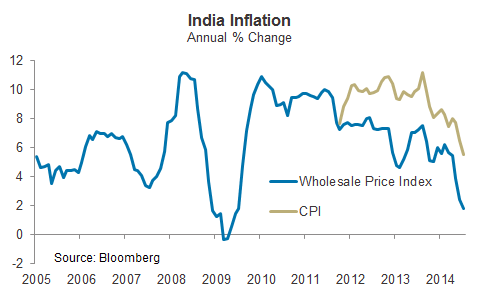 The Central Bank of Russia (CBR) has been raising its policy rate aggressively to offset the inflationary impact of the weakness in the currency. While currency weakness is a good thing when adjusting to an external shock, it can move too far too fast.  Growth has held up surprisingly well so far (+0.4% qoq in Q3, +0.7% yoy) although we don’t expect that will last.  The uncertainty of the political/sanctions environment will continue to be a drag on business investment, consumers are feeling the impact of higher inflation through lower real incomes and the oil price is sharply lower.

CBR is taking the right approach however by ensuring financial stability while at the same time managing a decline in the currency that allows the economy to adjust gradually.  The bank also appears keen to build its inflation fighting credentials in the lead in to the adoption of a formal inflation targeting regime next year.

In Brazil the central bank resumed interest rate hikes at the end of October with a 0.25% increase in the Selic rate to 11.25%.  As I’ve said many times before Brazils inflation problem is largely structural – the good news is the central bank is responding appropriately which throws down the challenge to the freshly re-elected President to engage in meaningful structural reform of the labour market and network industries in particular.  I expect the Selic rate will be closer to 12% before long.