Oil prices have continued to fall since I first mused on the broader macro-economic consequene prior to Christmas.The price of West Texas Intermediate is currently under $US50 pb, a 55% decline since the peak of mid last year.We’ve had a couple of days now of relative price stability but it’s too soon to call the bottom.Being a predominantly supply-driven event we need to see a supply response before calling an end to the sell-off.

The conclusions about the economic impact remain the same. While tough for producers lower oil prices will ultimately prove a benefit for the major oil importers and the global economy on balance.The near-term inflation impact will be significant and will add to concerns of “low-flation” and even deflation.However central bank’s will focus, and likely only act, on the extent to which lower oil prices feed through into more generalised disinflation – the so-called “spillover” or second round effect.

“Deflation”was the headline of the day yesterday as the CPI printed negative in the euro zone for the year to December.At risk of appearing unconcerned and potentially dismissive this is better described as negative inflation.The deflation epithet should be reserved for the more insidious problem of broad-based price falls and low inflation expectations that reflect weak demand rather than commodity price shocks. 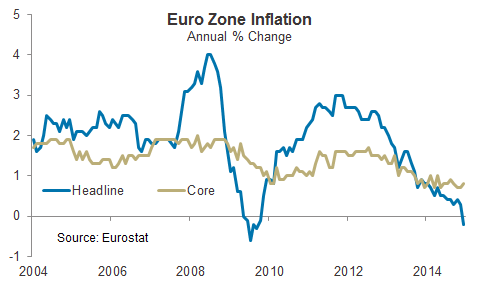 That said, its the euro zone that remains at greatest risk of defaltion in its more meaningful sense. It’s that risk that is widely expected to prompt the European Central Bank (ECB) into taking further action at its next meeting later this month.(Note the Governing Council has a new meeting schedule this year. They will now meet every six weeks rather than monthly).The continued disappointing take-up of the Targeted Long-Term Refinancing Operations (TLTRO) means the ECB is looking for new ways to achieve its intended balance sheet expansion.

A move by the ECB to a more fulsome asset purchase program including sovereign bonds appears already fully priced in by markets.But challenges to the implementation of such a program remain including continued opposition from the Bundesbank and the upcoming ruling on the legality of the OMT. So the biggest questions right now are what happens if the ECB doesn’t deliver and, assuming they do, will it make any difference?More on that next week.

Meanwhile in the US the minutes of the December FOMC meeting were released this week and shed no new light on the monetary policy outlook there.At the post-meeting press conference Janet Yellen had already indicated an orthodox approach to the oil price fall by stating the impact would likely be transitory although there was some chance of spillover.I’m still picking June “lift-off”for interest rates in America, although risks remain biased to later.

Here at home calls for interest rate cuts will grow louder over the next few months as headline inflation heads well below the bottom-end of the Reserve Bank’s 1-3% target band and remains there for the duration of 2015. 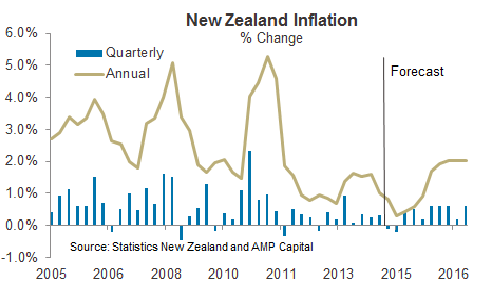 Those calls will be disappointed.Continued low inflation has the Reserve Bank on hold for most if not all of this year, but I still think the next move interest rates is up, it’s just a question of when and by how much.

The answer to those questions will not be answered by the price of oil but rather the ability of the New Zealand economy to continue to grow at an above-trend pace without generating inflationary pressures. In my view that will largely be determined by the extent to which wages respond to continued falls in the unemployment rate as 2015 unfolds.