AMP每个季度有一份投资战略报告（见下文），上周公布的这个报告对今年第三季度的投资形势做了分析，包括境内外的债券和股票、纽币，宏观上全球的经济增长，以及AMP的投资战略：underweight the New Zealand dollar, at benchmark for equities, underweight bonds and overweight cash across our diversified portfolios.

This week we released the October edition of Quarterly Strategic Outlook incorporating the outlook for the global economy along with commentary on the key asset classes from our Head of Investment Strategy Keith Poore.The September quarter was another positive one for our diversified fund investors. Bonds produced healthy returns with low global inflation, policy easing from the European Central Bank and ongoing Ukraine concerns keeping yields well bid. Share markets inched higher over the quarter assisted by solid earnings both here and offshore.  New Zealand shares outperformed global shares with no change of government removing the uncertainty risk premium. However, shares have entered a flatter and more volatile return profile recently. This is something we expect to persist given uncertainty over the path of US rate tightening and ongoing geopolitical tensions. The New Zealand dollar was sharply lower over the quarter on another large decline in dairy prices plus intervention in the currency market by the Reserve Bank of New Zealand. Improved global sentiment on the US dollar also contributed to the weaker New Zealand dollar over the quarter.

At the macro level, global growth continues to improve but that recovery is proving to be increasingly uneven.  Despite a weak start to the year, the US appears to have the greatest upward growth momentum of the major developed economies.  This is leading to divergence in growth prospects between the US and the Eurozone and Japan, which will soon progress to a divergence in monetary policy settings. The US Federal Reserve is likely to begin tightening monetary conditions from the middle of next year while the European Central Bank and the Bank of Japan are expected to continue easing for some time. We continue to expect global growth will be stronger in 2014 than 2013.   With growth in emerging markets expected to be unchanged from last year, global growth is forecast to come in at 3.3% this year.   We expect further recovery over the next two years with growth of 3.7% expected in 2015 and 3.9% in 2016. 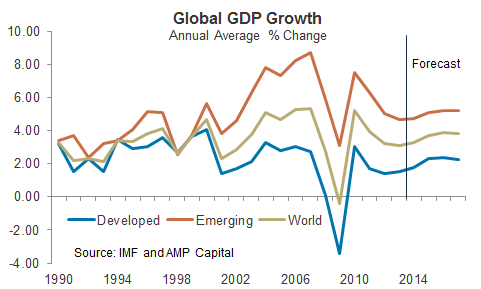 The lack of inflation is the key theme in the investment landscape at the moment. Against this backdrop, we think rising interest rates in the US will be accompanied by higher growth, which ultimately will be positive for shares given valuations are not overextended. We expect rising US rates to modestly pull up global long term yields, lift the US dollar higher, and by implication push the New Zealand dollar lower. Consequently we remain underweight the New Zealand dollar, at benchmark for equities, underweight bonds and overweight cash across our diversified portfolios.