The recent spike higher in the US Employment Cost Index (ECI) has received a bit of attention recently.  With markets attuned to any nascent display of inflation the rise in the annual rate of increase from 1.8% in the year to March this year to 2.2% in the year to September has not gone unnoticed. 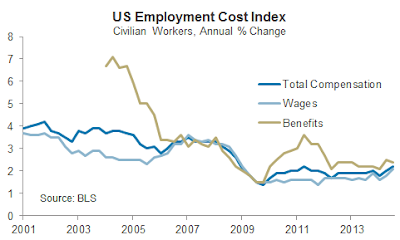 Secondly it appears the recent rise in the wages component of the ECI just brings it back into line with average hourly earnings, the annual rate of increase in which has been tracking a little over 2% in the past few months.  In that respect there is little new news in the ECI to get excited about. 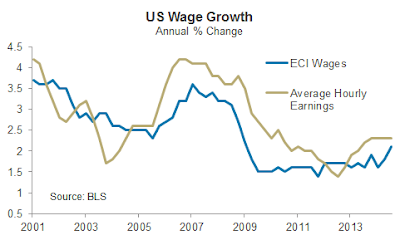 But as I’ve said on numerous occasions before; it’s ultimately unit labour costs (ULCs) that matter most to the inflation outlook. ULC are clearly trending higher’ although admittedly it requires a 24-month moving average to find a nice fit with core inflation. 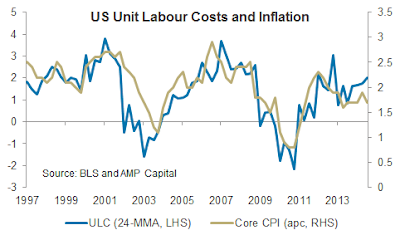 The upshot is that wage growth is off its lows and ULCs are trending higher.  Core inflation remains subdued and may indeed continue to be subdued for a while yet.  Core inflation excludes direct commodity price effects by excluding food and energy prices but second round effects of lower oil prices in particular are likely to keep core inflation pressures subdued in the near term.  The higher USD will also keep inflation subdued.

But monetary policy must retain a medium term focus. The ECI is just the latest in a number of indicators that suggest continued monetary policy normalisation is warranted in America.  We continue to expect the FOMC will leave interest rates unchanged into next year with the first interest rate increase likely in mid-2015.