Inflation is low nearly everywhere.  In most countries that’s no surprise – think about the Euro zone where growth is insufficiently robust to make any significant dent in the huge amount of spare capacity that exists across the region.  Even in America where growth is stronger, a large negative output gap means inflationary pressures remains benign.

The surprise, at least for me, is persistently low inflation outcomes in New Zealand where we have recently enjoyed a period of growth that is the fastest in a decade, the strongest in the developed world and has led to a closing of the output gap.  Yet the only sustained inflation pressure in the New Zealand economy at the moment is in the housing sector.  Everywhere else inflation remains largely non-existent.

So why is inflation now back to the bottom-end of the Reserve Bank’s 1-3% target band?  I can point to a number of reasons. Firstly, and perhaps most obviously, the recent strength in the exchange rate is still flowing through to lower prices of tradeable goods. 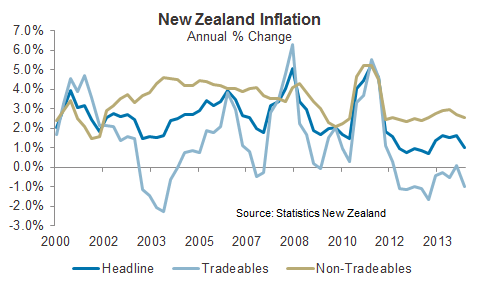 Secondly we have recently seen a period of strong business investment that has added to the economy’s non-inflationary potential growth rate.  That is helping keep non-tradeable inflation pressures in check.

The third factor is recently strong net inward migration.  When we think of the impact of strong net migration we think of the added pressure that puts on the housing market.  But the other side of the story is that much of the recent growth in employment has been met by rising participation – with net migration a key contributor to that.  That is helping keep wage inflation at bay.

So where to from here?  At the start of this year we published a paper “The New Zealand Tightening Cycle”.   That paper discussed the added uncertainties in this first post-Global Financial Crisis monetary policy cycle, including uncertainty about the level of the neutral cash rate, the level and future trajectory of potential GDP growth, how households would respond to higher interest rates, the balance between hiring and investing by firms as they resourced themselves for increased demand for their goods and services and the impact of LVR restrictions on the housing market.

We know a bit more about some of those things but not all of them.  In particular with the exchange rate now lower we expect a positive contribution to inflation from non-tradeables prices over the next few quarters.  But in general there is still more than the usual degree of uncertainty about the future direction for domestic interest rates. 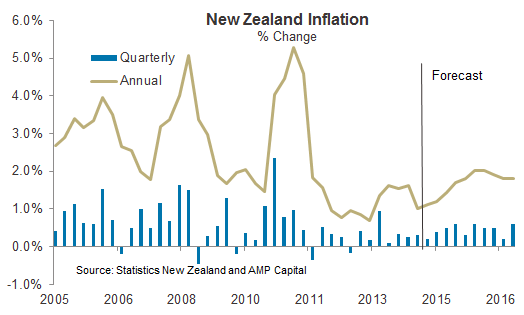 It’s my expectation that we will still need higher interest rates from current levels.  Growth, while off its peak is still expected to remain ahead of potential which will ultimately lead to upward pressure on prices.  We are not prepared to write inflation’s obituary just yet!!

But given the persistence of lower than expected inflation outcomes, the Reserve Bank has time on their side.  I am shifting my expected next rate hike from March 2015 to September 2015 with a forecast peak in the Official Cash Rate of 4.5% by mid-2016.